A traditional foundation method to support a structure in an area where the ground freezes.
A footing is placed below the frost line and then the walls are added on top. The footing is wider than the wall, providing extra support at the base of the foundation. A T-shaped foundation is placed and allowed to cure; second, the walls are constructed; and finally, the slab is poured between the walls. Re-bars are tied and placed above the soil to reinforce concrete. 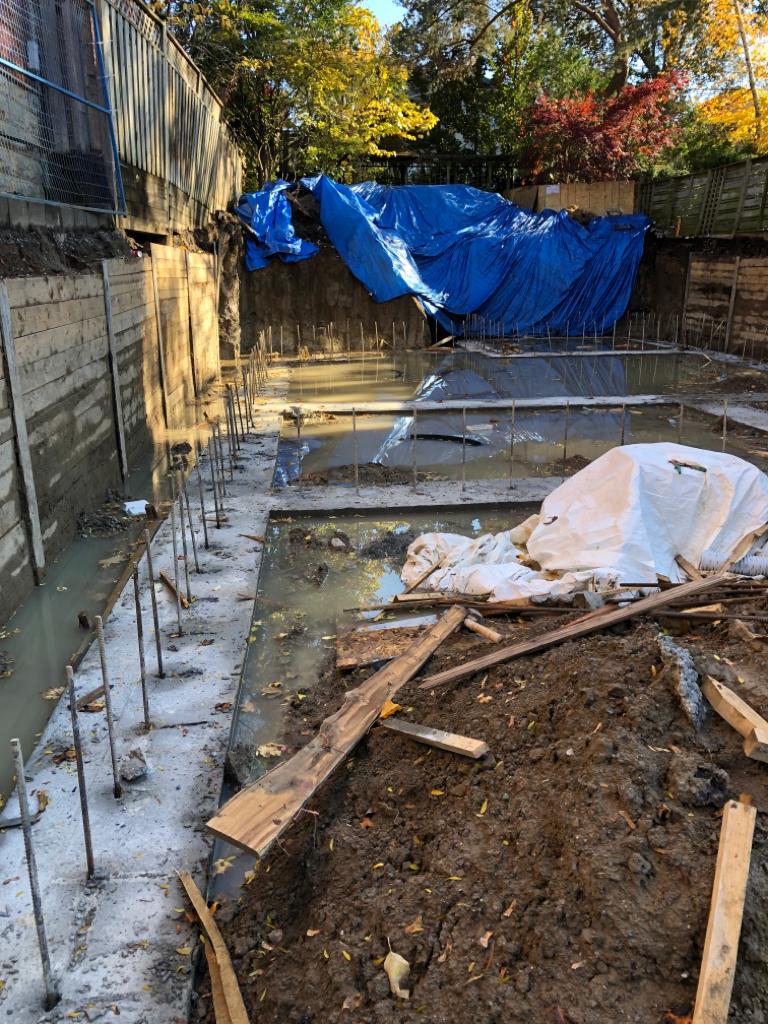 As the name suggests, a slab is a single layer of concrete, several inches thick. Under every house is a foundation, and under most foundations are footings. Most of the time we take footings for granted, and usually we can: For typical soils, a common 20 – 24 -inch-wide footing can more than handle the relatively weight of an ordinary house.
The slab is poured thicker at the edges, to form an integral footing; reinforcing re-bars strengthen the thickened edge. The slab normally rests on a bed of crushed gravel to improve drainage. Casting a wire mesh in the concrete reduces the chance of cracking. A slab on grade is suitable in areas where the ground doesn’t freeze, but it can also be adapted with insulation to prevent it from being affected by the frost heaves. (see below)

Precision is the name of our game!

This method only works with a heated structure. It relies on the use of two sheets of rigid, polystyrene insulation—one on the outside of the foundation wall and the other laid flat on a bed of gravel at the base of the wall—to prevent freezing, which is a problem with slab-on grade foundations in areas with frost. The insulation holds heat from the structure in the ground under the footings and prevents heat loss from the edge of the slab. This heat keeps the ground temperature around the footings above freezing

A helical pier is a steel shaft with helices, similar to a large screw, that provides a foundation support for various types of structures. The shaft is usually square and manufactured in 5 foot sections. Helical piers are often used when challenging soil conditions prohibit a traditional foundation system. They are also commonly used to correct and support existing foundations that have settled or failed.

The helical piers main function is to support and stabilize the structure’s load bearing walls by transferring the weight of the structure off the weaker soils and onto the piers. One of the key benefits of helical piers, is that they can permanently lift a sunken foundation back to its original level.

Foundation should fulfill the following objectives: